The School’s ‘Bumpers’ Races were a much-anticipated annual event of races in the School’s rowing calendar, in which everyone got involved. Especially in the early years, it was also the one time in the year when this sport took preference over all others.

John Millington Sing, the father of the School’s Boat Club and its main early supporter, faced a continual battle to encourage pupils to choose the rowing option when they first joined the School. Cricket was the summer sport most favoured by most schools in the Victorian / Edwardian periods and St. Edward’s was no exception. The Captains of Cricket were powerful figures who didn’t take too kindly to have promising players being hived off to the river and thus weakening the cricketing prospects for the season. 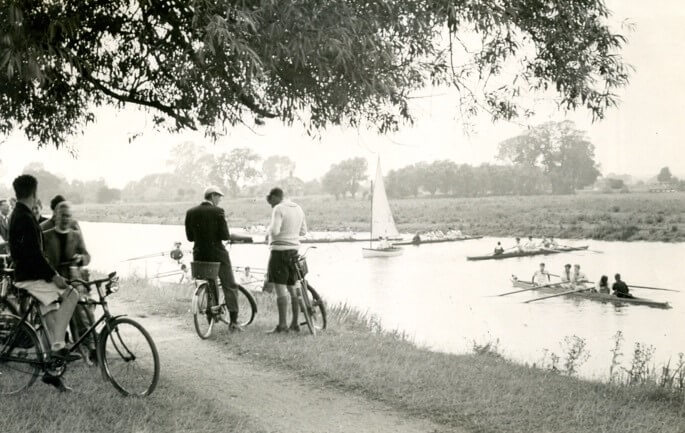 The ‘Bumper’ races were usually held in early spring when there were no other sports being played, so there was the opportunity for the whole School to participate.

‘Bumper’ races were first contested in Oxford in 1815 and quickly adopted by universities, public schools, hospital crews and boat clubs. In simple terms a number of boats chase each other in single file, in an attempt to ‘catch’ the one ahead. If successful, the bumping crew would move up one place at the expense of the bumped crew. With racing over four successive evenings, the aim was to progress towards the ‘Head of the River’ position.

At St. Edward’s initially, individual classes of forms then each Tutor’s Set (later Boarding Houses) were allowed to enter up to three boats in the races, though not all had enough rowers so to do. The honour was such that everyone was raked in, whether they were natural oarsmen or not; brawn was all important, so non-rowing Rugby XV were at a premium: even cricketers weren’t turned away!

Once there were enough boats taking part, the races were divided into two divisions. Division 1 was for the elite, while division 2 was the home of the younger inexperienced rowers. The whole School lined on the bank of the river on Port Meadow each evening and cheered their sides on, it was considered a big deal and there were prizes to be won.

John Sing, in his time as a Set Tutor was known to be incredibly competitive, and somehow managed to draft the biggest physical specimens into his Set on arrival at Teddies! Inevitably, Sing’s were all powerful for many years. The racing was ferocious and hard, not made any easier by other boating traffic also using the river at the same time and often getting in the way. Boats capsized regularly and oarsmen fell overboard practically every night.

Bumpers continued at the School until the 1971 when ‘Winter Bumpers’ were introduced (won by Sing’s!) adding freezing water to all the other hazards. By the mid-1970s with changing times, health and safety was a key factor that drew a curtain on the School’s one hundred year ‘Bumpers’ history. Set B three Bumper’s Crews 1902. Sing’s I and II came first and second in Division One and Sing’s III came top of Division Two. Amongst those in this picture are Percy Underhill (centre) the first OSE to win a Rowing Blue at Oxford 1904. Behind him stands William Churcher, the Captain of Cricket and to his left stands John Freeborn later an Olympic standard Hammer Thrower! On the left of the picture seated centre is Lionel Simeon, eldest son of the first Warden – the figure in the long coat is Philip Merivale, later an actor of the stage and in Hollywood films both silent and the first ‘talkies’.

With thanks to Chris Nathan, the School Archivist. Sources include School Records, ‘Chronicles’,  School Histories, and former Master in Charge of rowing, John Wiggins.

Just over one hundred years ago the School had to deal with a pandemic...
28 May 2020 OSE, School Life

Exactly eighty years ago the remnants of the British Expeditionary Force (BEF), the Belgian...
12 May 2020 General, OSE, School Life