The School Archivist, Chris Nathan, details how following the two World Wars, St Edward’s strove to commemorate the 273 OSE and staff lost in both conflicts in the most suitable and dignified manner ‘as a constant reminder of the sacrifice in war made by the sons of the School (Chronicle)’.

While the ideals and motivation behind the plans were highly praiseworthy, they tended to be grandiose, and the costs involved substantial and beyond the immediate means of the School. Appeals were inevitably launched in good time but with varying response.

As far back as the Boer War, the three OSE lost had been commemorated on oak panels in Chapel, costs raised by donations: these panels would be continued to include all those killed in WW1. In 1917 the Prince of Wales initiated a national responsibility on all schools to recognise their fallen. The School Council launched a £10,000 (£874,000 today) appeal for a very ambitious set of plans, including a Calvary, new cloisters, Science School, funds to educate the sons of lost OSE at reduced rates and any residue going towards new dormitories and classrooms.

Very quickly it became apparent that the financial target was not going to be reached, despite Wilfrid Cowell shaming (not personally) 470 OSE in public who had not contributed! In the end, the Calvary did go ahead and was unveiled in 1919 and the balance was spent on the School’s sixth boarding house (Tilly’s), with music rooms at the back, unveiled by Warden Kendall in 1925. The Science School would have to wait until 1928/9 and the extra cloisters idea was abandoned.

The plans of the Big School extension in 1943, that never happened, are pictured below. 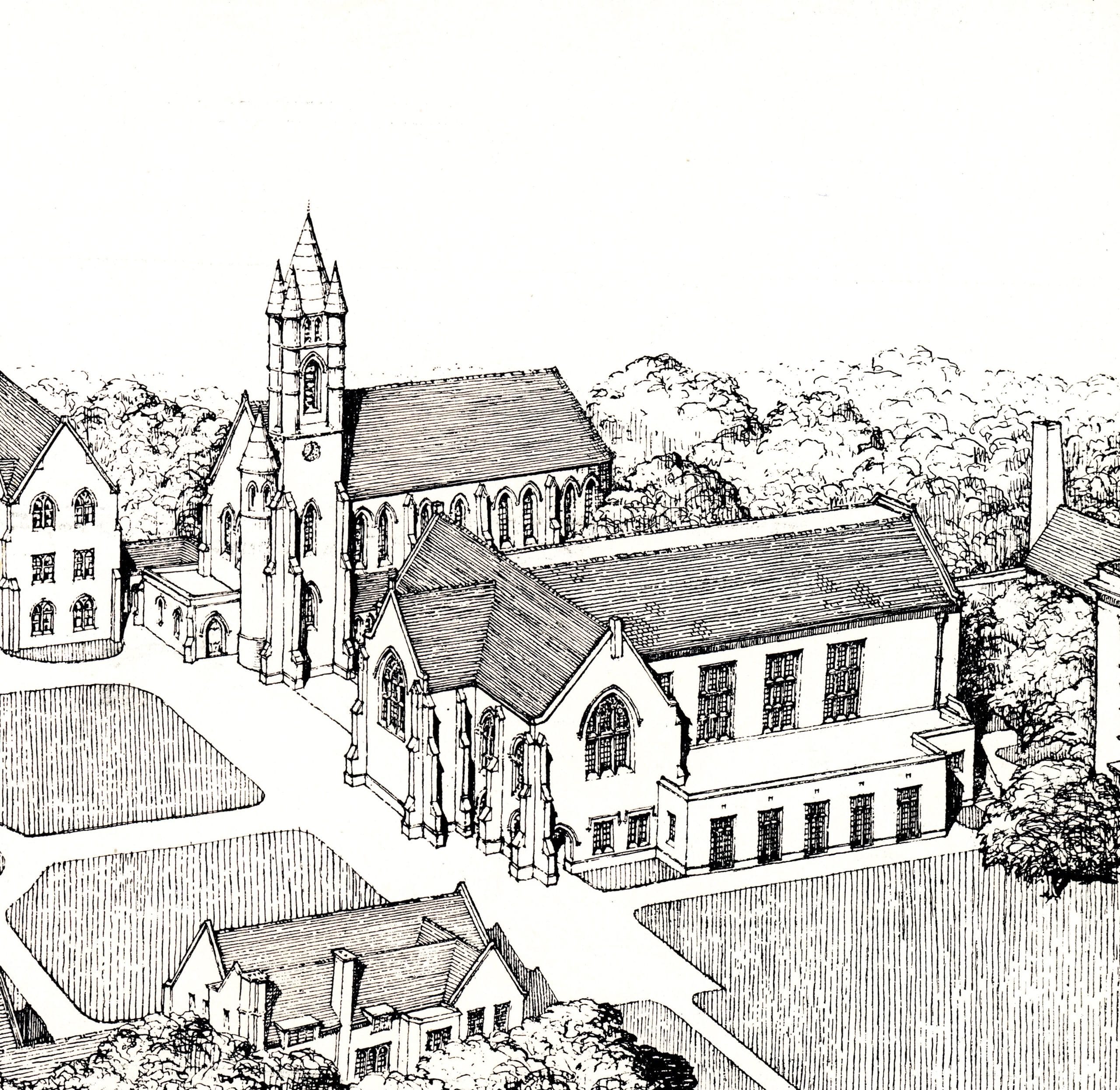 While WW2 was still raging, in 1943 the School Governors tried not to repeat the misjudgments of their predecessors but again fell into the trap of overestimating what monies might be required to fund a second set of significant new memorial buildings. This time an apsidal wall behind the calvary was suggested with the fallen names, an extension to the back of Big School to include a library and new speech hall and once again grants to sons of OSE killed or incapacitated in the war.  In the various appeals, at least three of them, funds were very slow coming in, though there were some very generous individual donations. When the fund closed in 1956, £19,000 (£503,500) had been raised to supplement the costs.

Once again major changes had to be made to the original plans, the apsidal wall was substituted by a wooden board in the Memorial Chapel in 1949, showing the then-known names of those lost. The major extension to Big School was eventually abandoned due to a mixture of costs, extended planning permission issues dictated by post-war restrictions, listed building issues and labour shortages in Oxford. Instead plans for a totally separate War Memorial and Arts School building (ICT today) behind Big School and the Chapel were devised and eventually approved and opened, again by Henry Kendall, at his last Gaudy in 1956.

To accommodate this new building the original Calvary had to be moved a few feet towards the Chapel.

You can watch a short film of our Remembrance Service in the Quad this year below.