The National Schools’ Regatta took place on Saturday 29th May at Dorney Lake near Eton, the venue for the Olympic Regatta in 2021. Our crews had take part in no formal racing for 15 months, but with plenty of training and private fixtures under their belts, crews and coaches felt ready for the chance to finally compete.

The Girls 1st 4X,  Meara James, Isabel Llabres Diaz, Saskia Ward and Isabella Makepeace, were the first boat down the Olympic course and finished an encouraging 8th out of 34 in the 1900m time trial. This placed them in the B final where after a nervous start the crew found their rhythm and started to move through the field and with only a few meters to go, squeezed ahead of Tideway Scullers School to finish 3rd. This gives them a National ranking of 9th and is the highest position achieved by a St Edward’s crew in this event. It’s a great reward for all the effort put in by the athletes and coaches. The 4X will now continue to train for Henley Women’s Regatta at the beginning of July and then Henley Royal Regatta in the middle of August. With three of the crew back next year and some talented girls coming through, the future is looking bright!

Final results and a video of the race can be seen here. 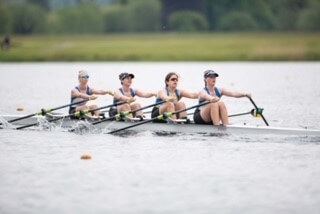 The Boys 1st VIII of Noah Wilmot, Will Cruddas, Max Ebner, Will White, Josh Brangan, Anthony Mallett, Guy Wheeler, Rory McDonnell, and Cox Abi Drennan, went into the time trial knowing how important it was to make the top 8 which would see them into the A Final and with a wind starting to favour certain lanes, it was clear that the time trial was even more important. Thankfully they did make into the A final but finishing 8th left them in an unfavoured lane and with plenty of work to be done. In the final, the crew had one of the best 1500m they had put together and to almost everyone’s amazement, (including the commentator!) St Edward’s were moving into 2nd position ahead of St Paul’s and closing in on Eton! With 250m the St Edward’s boat found itself in 3rd but with the other crews closing in fast on the far side of the lake, the VIII found themselves trying to hang on but in a tight finish ended up in 6th place. This is a young crew with two Upper Sixth, five Lower Sixth and two Fifth Form pupils, so there is plenty more to come and they will be looking to learn from this experience as they now prepare for Henley Royal Regatta.

Final results and a video of the race can be seen here. 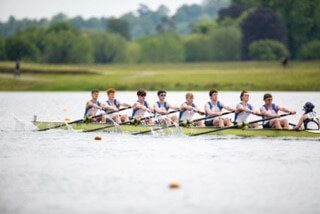 On Monday 31st May Evie Gowen and Hermione Brewster competed in the J16 2X and having not raced since they were Shells, there was some excitement but also a few nerves that their first race back was a national event! There were 25 crews entered and the top 18 would be selected from a time trial into 3 finals with the remainder eliminated from the competition. With a headwind picking up and the St Edward’s crew being one of the smallest competing, it looked like they were in for a tough day, but they put together a great row, finishing 4th and a place in the A final! With the girls already achieving a top performance it was great to see them go after a medal, however the conditions were always going to make this difficult and they held onto their 4th place from the time trial and were rightly pleased with their days work. Evie and Hermione will train with the senior 4x for the remainder of the summer as they look to develop their skills and racing experience. 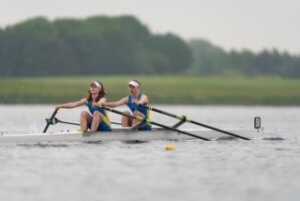