Upper Sixth Form pupil Alexander Barrington Brown explains how he came to be part of a high level policy discussion on the idea of bringing more politics into the national curriculum.

‘Last week, I was lucky enough to give evidence to an All Party Parliamentary Group (APPG) on the issue of Political Literacy. University students, teachers and policy experts were there to discuss their ideas in integrating politics more into the national curriculum, firstly through the establishment of a Government & Politics GCSE. 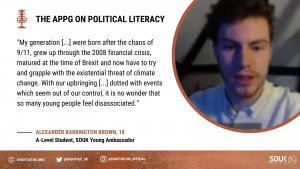 politically engaged. I decided to focus upon the turbulent time our age group have grown up in. Born in the aftermath of 9/11, growing up through the 2008 financial crisis, and now facing confusing and destructive threats of Brexit, a global pandemic and climate change; it has been difficult for our generation to see a world not mired in difficulty and turmoil. An education in politics to understand the fundamental basics, but also to combat fake news and learn about different solutions to global issues, is essential in allowing for our democracy to survive and endure new threats. 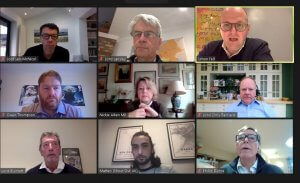 Members of the APPG on Political Literacy

It was refreshing to see a group of Lords and MPs who were willing to promote new and positive initiatives in a time of such national despair. The two co-chairs, Simon Fell and Lord Iain McNicol, both spoke on their own introductions to politics at a young age around the dinner table, yet still yearned for greater provision of political education within their schools. It was also humbling to hear that Lord Blunkett, the former Home Secretary, wished to hear more from young people as opposed to advisors, civil servants and thinktanks. It was a fantastic experience to be a part of our democratic process and I hope that progress on this issue will be achieved in forthcoming meetings.’

In the clip below, you can watch Alexander speak about this in School Assembly.

The debate around GCSE reform continues to gain momentum, and with the cancellation of...
13 August 2020 Academic