The rapid development of circumstances at the beginning of last year meant that Mr Wiggins’ excellent review of the truly wonderful Staff Play was never published. On the anniversary of this cultural gem, therefore, we remember the talent, the laughs and the all-round jollity of a production that will live long in the memory.

John Wiggins writes: Following his outstanding debut with Hamalot in 2017, Head of Drama, David Aldred, stunned audiences again last year with his portrayal of an ambitious leader brought to an end by his closest colleagues and the ensuing competition for supremacy by the remaining rival factions.

The loss of performance space with the demolition of the Hall in 2018 required a major rethink on the format to allow the whole school to attend their ‘History lesson’. And so was born The Roman Play, written and directed by Mr Aldred and performed twice-nightly in January 2020 in the North Wall to rapturous audiences of pupils and colleagues and a few ‘close family’.

Both Classical and Literary scholars winced as liberties were taken with the tale of Julius Caesar’s demise, over-acted wonderfully by the Warden. Each show was introduced, interrupted, narrated and finalised by Tiresias (John Wiggins) the blind soothsayer imported from Antigone (the school play of November 2019 about which due praise was delivered). Thankfully, not least with the unscheduled wardrobe malfunction on the opening night, we were spared Tiresias‘ classical transgender phase. 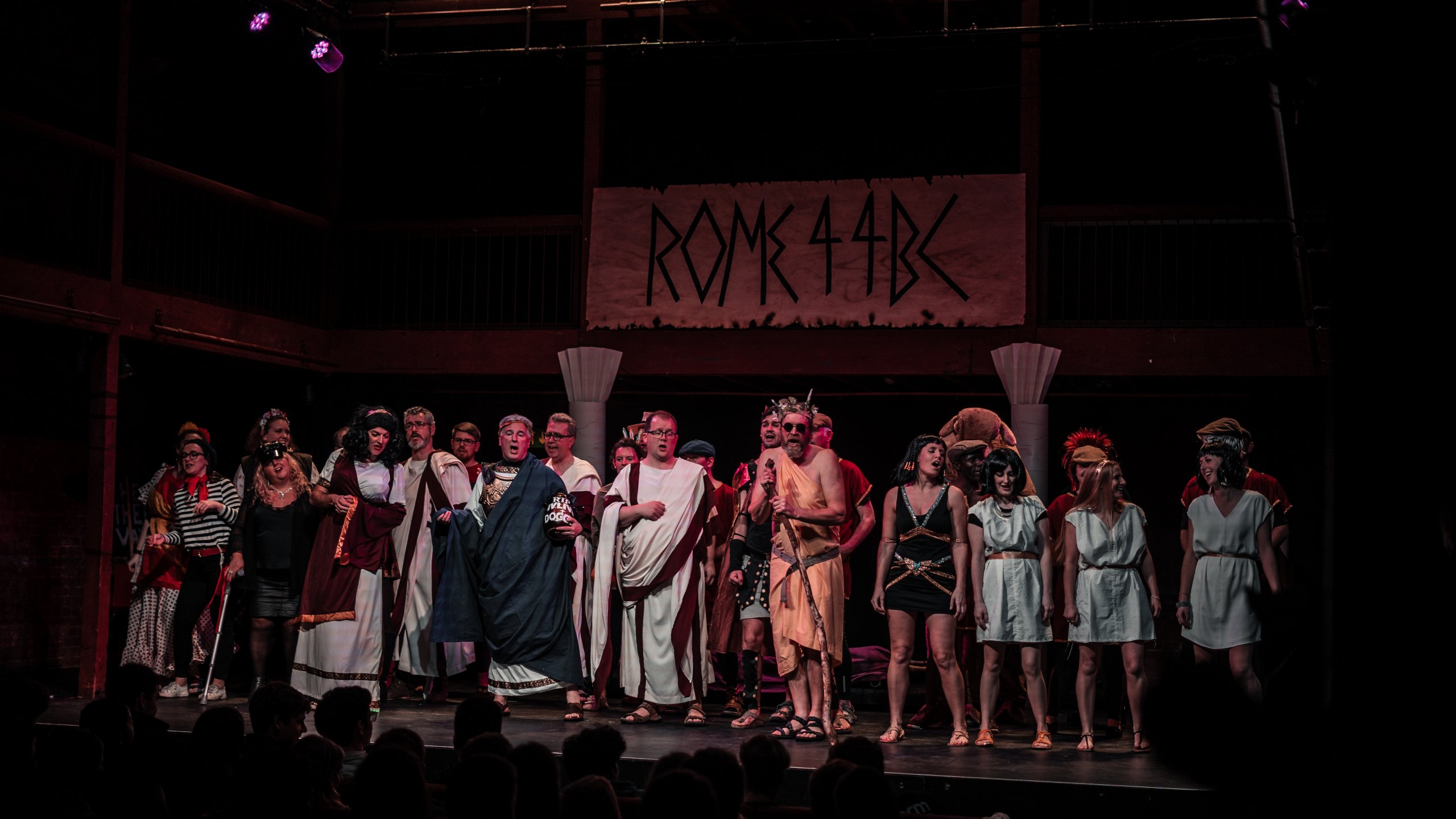 The choice of production was, not least, an homage to now-retired Classics teacher, Ed Hunt, a veteran of staff productions these past 20 years. Ed ruled the stage as Brutus accompanied by the singing Senators, Messrs Taylor, del Strother and Livingstone. Their plot to rid Rome of Caesar aided and abetted by Nick Coram-Wright’s Mrs Caesar, Calpurnia, wielding the ‘unkindest cut of all’ came to pass on the predicted date in March. Irritatingly for them, the claim to rule Rome thereafter was challenged by three other contenders for the crown. At Tiresias‘ insistence the dispute was to be settled the ‘old Roman way’ with a dance-off (choreographed superbly by Head of Dance, Lisa Elkins) judged strictly by the old blind man himself but ultimately with the necessary aid of the playgoers.

Oddly enough, over the course of the four shows, each managed a turn with the crown. First to gain the popularity of the people was the imperious, Maximus (Paolo Torri), ‘husband to Maxime and father to Minimus’. He rejected the promises of the Senators and eventually tore himself away from the alluring and over-qualified temptress, Bella Rosa (Naomi George) to forge an alliance with the divine Cleopatra (Cassie Cooper). Cleopatra having travelled ‘across the seas by camel’ (Messrs Davies and Davis) arrived with a Greek (but Egyptian) chorus of Sarah Eldred, Holly Hyams and Chloe Riddle. Much to the excitement of visiting Britannia, Ross Simmonds, they confirmed that they did indeed do ‘everything together’. Britannia, still (but only just) in pre-Brexit mode was travelling to Caesar’s funeral with a very excitable trio from France (Anne-Laure Davies as Gallia), Spain (Paula diaz Rogado as Hispania) and a very late member of the cast from Germany (Svenia Schwartz taking on Germania). They fell in with the ‘lusty wenches’ for the dance off. These were Caesar’s ‘spoils of war from Gaul’, Dominatrix (Judy Young), Magictrix (Anastasia Elliott), Weetabix (Sophie Barnes) and Littlemix (Lorraine Turley). Mrs Young has played a similar role (and in a very similar costume) for most of the past twenty years but this time was the bearer of Caesar’s child – her claim to the throne. In one of several Pythonesque pastiches – a timely, though unexpected, homage to Terry Jones who died on the opening day of the performance – Dominatrix led us through the timeless and still unresolved question, ‘What have the Romans done for us?’

Brutus and the Senators had hatched the plot, code-name ‘Caesar Salad’, to do away with Caesar in timely fashion, according to C-C-Casio’s new invention, the wristwatch. In their dance-off (to Stayin’ Alive) they were joined by Mr Coram-Wright’s Calpurnia who had earlier delivered the immortal line, “He may be Caesar but he’s also a very naughty boy” and supported (literally) by Imperial guards, Marc Gillingwater and Jack Fairbrother. 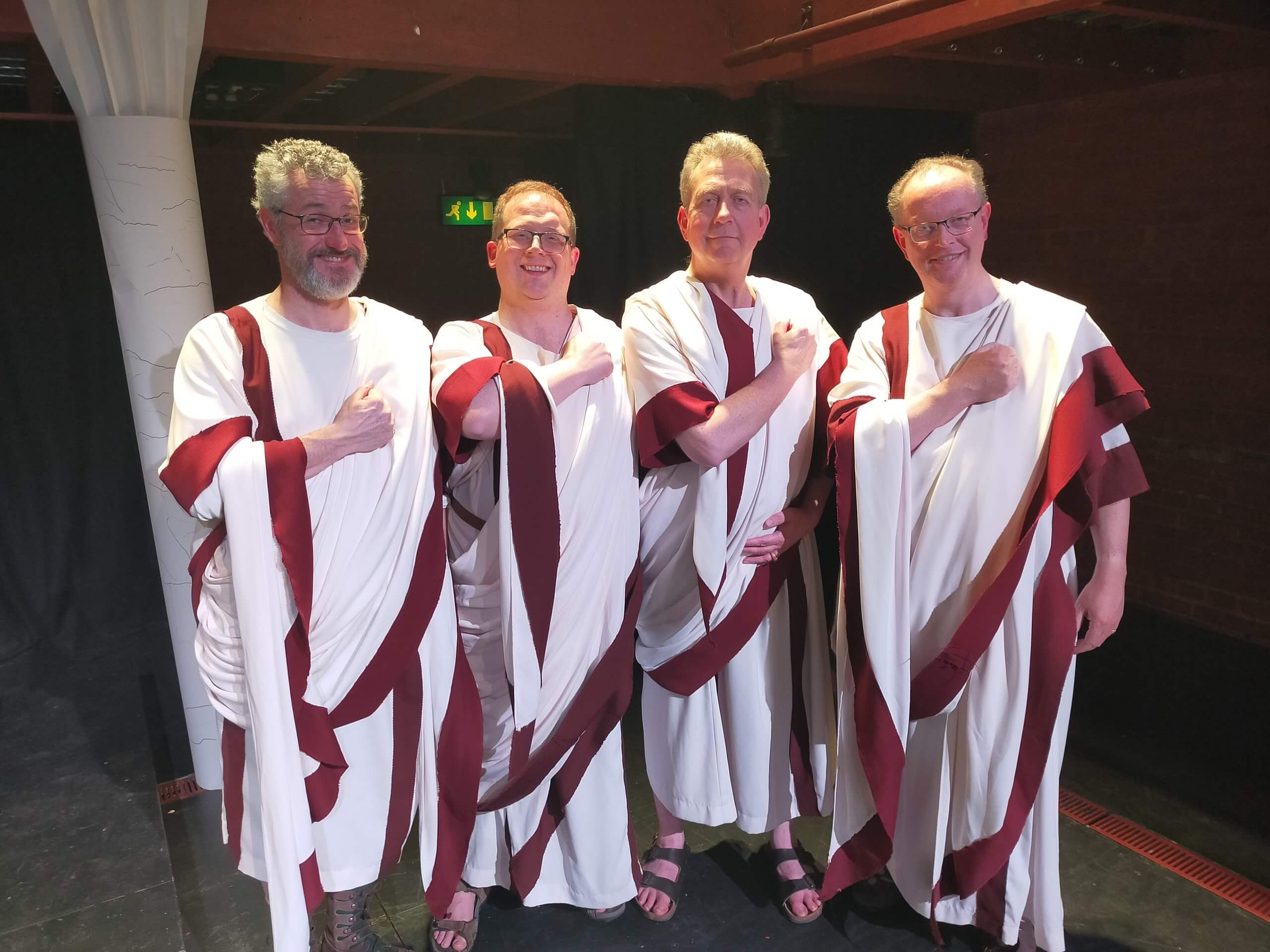 When not on stage, Jack worked closely with David Aldred to set up all of the sound and lighting, creating just the right mood and dramatic effects to a simple yet effective staging set up by Head of Co-curricula Drama, Katrina Eden with assistance from the Art department. Lauren Mackrell with Katrina assisted with direction offering many tips to the ‘amateurs’ on stage regarding movement, occupying space amongst many other valuable matters while Mr and Mrs Barstow were invaluable in providing Calpurnia’s make-up and Mr Simmonds’ sandwich board – or was it the other way around?

The fourth group of protagonists were late to the political party with an eye to an opening but up stepped leader of the Peaky Plebs, a loosely Birmingham-based group of flat cap wearers, to ‘rise up against the tyranny of the ruling classes’ – at least, that was how it was scripted for the Sub-Warden, Tony Darby. Until finding their own voice, John Simpson was quickest with the enthusiastic lines to fall in with each of the other groups, each being more impressive than the preceding claim to the throne. Their contribution to the dance-off was dark and violent and to the Peaky Blinders theme tune with other plebs, Matt Allbrighton, Lucy Hamblin-Rooke, Henry Chitsenga, Margaret Lloyd (another fast-learning, late addition) and Lawrence Tao. Margaret stepped up with 24 hours’ notice to add stage work to Stage Management, still somehow keeping the cats herded. Mr Tao also led a double life as the enthusiastic Eunuch with ‘only a small part’ which had unusually not been ‘cut’ after all. Of the various ‘character arcs coming to fruition’ it remained for the ghost of Caesar to relate that his remains were indeed laid to rest with those of his beloved Shitzu, Biggus Doggus in Llanfairpwligwyngyllgogerychwyrndrobwilliantysiliogogogoch-ium delivered masterfully by the Senators as well as Caesar himself.

But what of the music? The show opened with ‘History Tonight’ introducing the whole cast to the stage and closed with ‘Finale’ – a close relation to the better-known ‘Volare’, whose introduction in Italian called upon the native talents of Signor Torri and the show’s Musical Director, Gabs Damiani, who accompanied throughout; much needed rhythm was provided masterfully by master Tom Niblett. Other musical interludes were provided by the Senators telling of how ‘Caesar Salad’ might be on the menu via Abba’s ‘Mama Mia’. Calpurnia delivered a heart-wrenching rendition of I’m not the only one after hearing of Caesar’s misdemeanours in Gaul and, as an homage to the people of Rome, Lorraine Turley as Littlemix treated us to I surrender all.

But what did the critics have to say? Overheard: “The star turn was the Camel” (not sure if that was the front or back end that said it); “One hour was enough”; “The North Wall provided an intimate atmosphere – though a little too intimate at times!” possibly referring to the aforementioned wardrobe malfunction.

But from those taking the trouble to write: “I enjoyed the staff play last night – it was brilliant!”; “I loved the dance off.”; “…such elegance and style”; “I laughed so much I even had tears”; “It definitely had a feel good factor?”; “Thank you for such good fun and memories?”

For a production prepared and performed all within three weeks, the standard was ridiculously high: a measure of the commitment, dedication, talents, spirit and generosity of this wonderful common room. “We need these moments in these otherwise difficult times.” But without doubt, while a significant number put themselves out to produce this wonderful production, it cannot happen without the support and goodwill of colleagues who plug the gaps that arise when others take on more. Thank you to all and finally to the irrepressible Alex Tester who makes things happen and without whom nothing can happen. 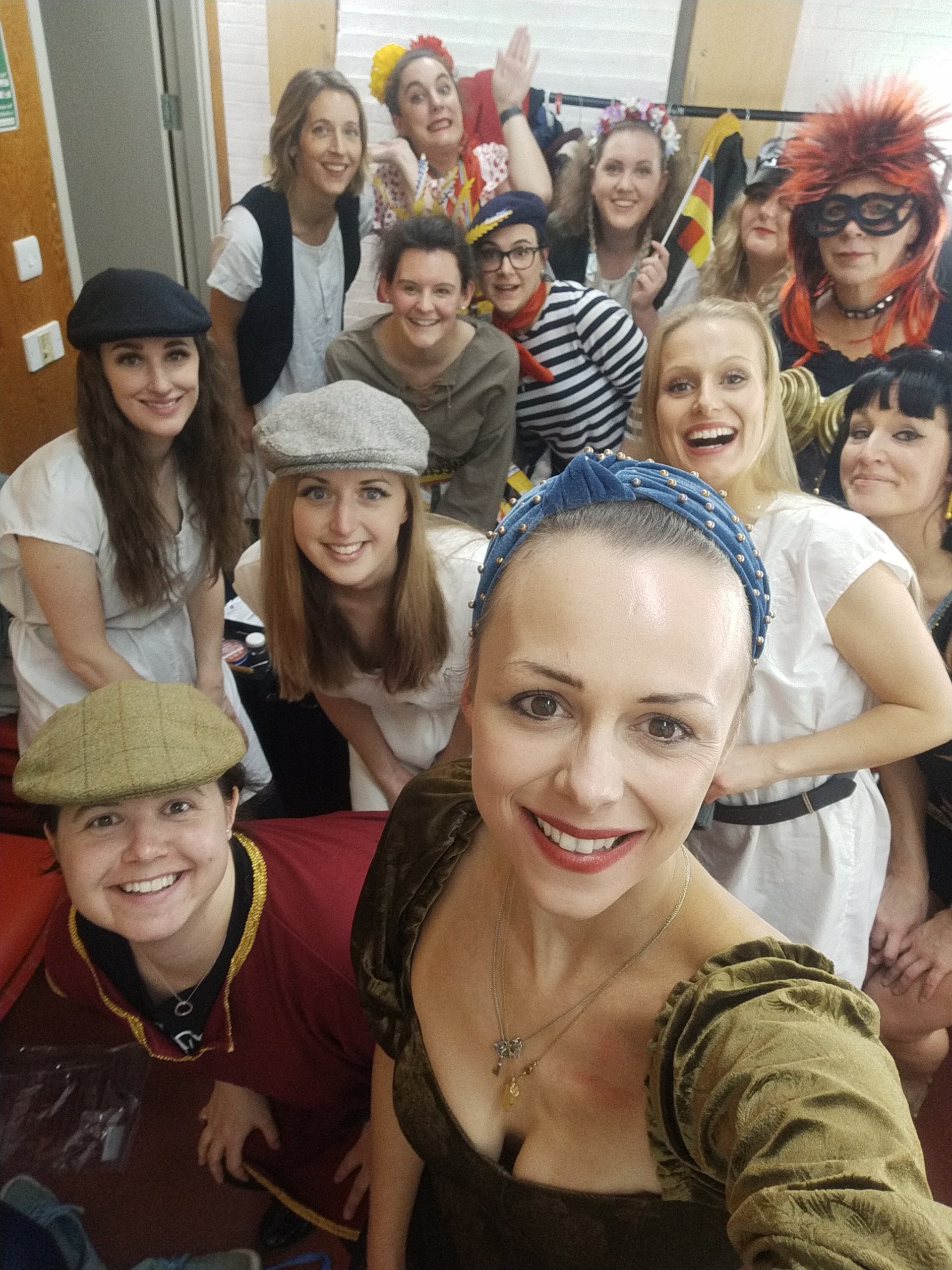 The Teddies Bees and their delicious honey is a lovely aspect of life at...