Sixth Former Caris Baker writes: At the start of this academic year, Ella Leeson and I were appointed Pastoral Prefects. This means that we are the bridge between the pupil body and members of staff concerned with the wellbeing of pupils and of the school community as a whole. It is a role that means a great deal to us – listening to pupils and taking on board their views is an essential element of how Teddies works, and part of what, in our view, sets it apart from other schools. The manner in which the pastoral care works here is fundamental to the quality and atmosphere of the School: it allows each pupil to thrive in their own respect.

One of our main projects this year, in response to feedback from pupils, has been rethinking and adjusting the core values we hold as a school. Early last term, Upper Sixth Prefects and Peer Listeners ran focus groups with junior pupils. This was led by the senior pupils, and what emerged from the evening were some amazingly open and honest discussions about how we want to behave as a school community.

Following on from this evening, using feedback directly from the pupil body, our core values have been further developed and refined to reflect what really matters to Teddies. A key role of the senior pupils is promoting these values in Houses, and in everyday school life, leading by example and encouraging conversations surrounding understanding and practice of values such as optimism, tolerance, courage and respect. For example, every Friday the Prefects have lunch with a different year group, allowing ongoing relationships and dialogue to evolve between the pupils as one pupil body.

Ella and I have since been working with designers to create a poster encapsulating the School’s ethos. We have picked out eleven keywords that we hope go some way to representing this which will be put up around School and in Houses as a reminder of what our school really values. 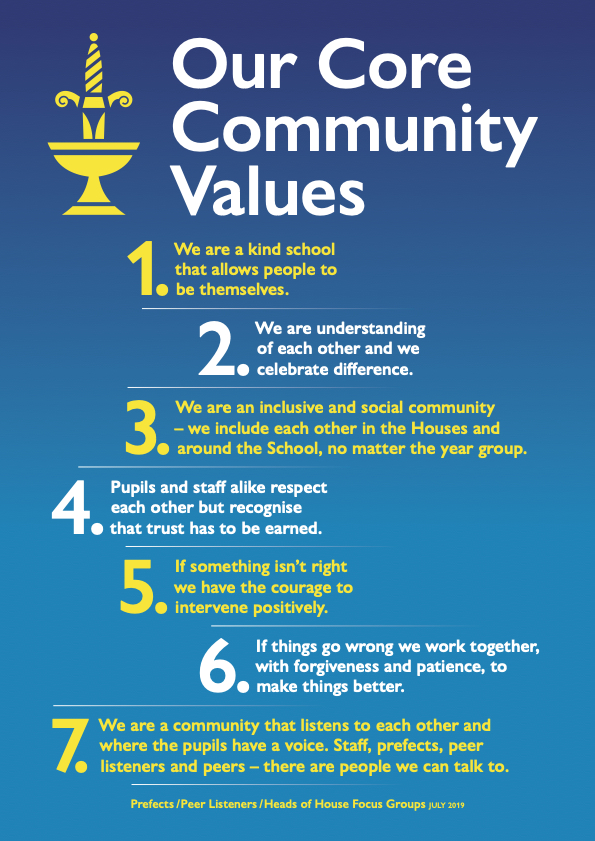