A Trip to Treasure Island

Fifth form drama pupils took part in a virtual theatre trip to Treasure Island via The National Theatre At Home programme which stages a production online every week. So far the Teddies community has enjoyed One Man Two Governors (“Brilliant! The vivacious James Corden was predictably the highlight” – Patrick Maxwell) and Jane Eyre. Here are some of the comments about Treasure Island from our fifth form explorers:

An outstanding production. Every feature drew you into Robert Louis Stevenson’s world of the most primitive pirates we know, presenting the fear and excitement of those who spoke of and even met them. Every aspect complemented each other. The set went from the simplistic arrangement of the inn, to an incredibly detailed vessel. The lighting created an exceptional illusion to which the audience really felt they were present on board ‘The Hispaniola’. The melange of horror and humour worked a charm, as did of course the outstanding talent of the cast, inhabiting vast varieties of characters; from the pompous Squire to the feral Ben Gunn. – Charlie Scales 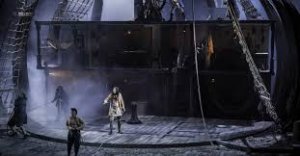 I found Treasure Island to be a thrilling performance. The blend of the incredibly thought-through stage and costume designs with the raw talent of the performers made for a spectacular production. I found that the stage made fantastic use of the space, as it created numerous surroundings very effectively. I also think that the use of props was great, specifically in the scene where Jim was holding what she thought to be “Flint’s fist” as it appeared to move on its own and choke her. Overall I thoroughly enjoyed Treasure Island and I hope that we can continue to watch Live theatre as this term progresses. – Keegan Boyd

My favourite part of treasure island was the stage structure and how it was used in so many different ways, for example when it turned when they were on the island, it gave a real sense of a bigger place and the characters a real sense of being lost… and how the same piece of stage was able to look like the front of a boat using masts and getting different members of the crew to yank the sail up added too a real effect of feeling at sea. I also enjoyed the use of lighting and sound, for example when the storm happened they used flashing white light and sound effects of gusting winds and waves crashing against the boat to show the audience the chaos of the storm. – Scarlett Gibb 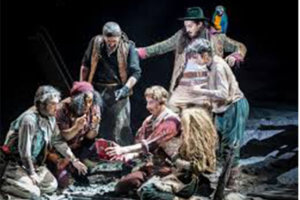 I found the play very exciting. I found the set design very impressive, and I wondered about the expenses involved in designing and putting up a moving set on that scale. Also the use of robotics in Long John Silver’s parrot was very impressive. It is always interesting to compare plays which have been made with a large budget and lots of freedom to a more restrictive budget which pushes the actors to create the scenery around them. – Louis Parr

I found that the experience was extremely encapsulating and grabbed my attention from the start… The atmosphere was so tense I felt as if I was really there! – Taggie Paganuzzi

In this most unusual of years, nearly 100 pupils at Teddies received their International...