A look back at the Cricket season of 2019

In Lieu of the launch of the 2020 cricket season, Head of Cricket Peter Swainson looks back at the successes of last year

The Cricket Club continued along a positive trajectory in the Summer term of 2019, and was able to regularly put out 12 boys’ teams. The girls’ programme grew in popularity, enabling us to put out two competitive sides for two fixtures on the same day by the end of the season.

The Yearlings As started the season with a bang, with early season victories against MCS, Rugby and Bradfield and came close to a memorable victory over Eton, until the weather intervened. However, a frustrating loss to Malvern in mid-May triggered a down-turn in fortunes as they lost narrowly to Winchester, Harrow and Marlborough – but with a strong bowling attack, the future looks promising. The Yearlings Bs and Cs, following early season successes against Rugby, had rather more challenging seasons, but they continued to work hard and progressed over the course of the term.

The Junior Colts As had to endure the loss of key players to the 1st XI, and, whilst they displayed a tremendous attitude in training and matches, had a tough season in terms of results. However, the boys had great success in the ESCA National T20 U15 Cup, comfortably defeating Abingdon to win the County Cup, before narrowly losing by five runs to Bradfield in the Regional Final. The Junior Colts Bs enjoyed a fine early season win against Bradfield, whilst the Junior Colts Cs recorded fine victories against Rugby and Winchester. Neither side were helped by the loss of numerous players throughout the term, but battled hard throughout and were unlucky not to record a few more victories.

The Fifth Form were once again merged with the Sixth Form last season, thus enabling us to regularly field four XIs, despite the ever growing pressures of exams. The 4th XI enjoyed a stunning 10 wicket victory over Rugby, whilst the 3rd XI, who had enormous potential, but were rather inconsistent, enjoyed excellent victories against Bradfield, Malvern and Marlborough. In a similar vein, the 2nd XI were very talented, but, rather like last year’s England side, were unable to regularly post a competitive total to allow their excellent bowling attack to defend it. However, they did occasionally realise this potential in recording fine victories against Bradfield and Eton. 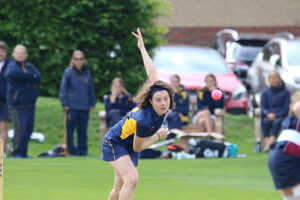 The girls’ programme grew from strength to strength last summer, with well over 20 girls regularly training and playing in fixtures against the likes of Rugby, Bradfield, Wellington and Marlborough. We entered the National U15 Cup for the first time and enjoyed a stunning success against St. Helen & St. Katharine, before losing to a far more experienced Oxford High side in the County Final. The girls made great strides over the course of the season, further developing their core batting and bowling skills, whilst also having tremendous fun, and were rewarded for all their efforts. Tilly Pumfrey was a stand-out player, with a 17-run victory over Rugby at the end of the season.

A young, but extremely talented 1st XI had, on the whole, a very successful season, winning ten of the 13 regular season fixtures completed. Of particular note were the fine victories against Rugby, Malvern, Winchester, Harrow and Clifton. However, the boys’ inexperience was prevalent at times and contributed to disappointing losses to Radley and Marlborough in the John Harvey Cup, meaning we just missed out on retaining the Cup. Nevertheless, these experiences will stand the boys in very good stead for their future cricket years.

In individual successes, 1st XI captain Ben Charlesworth, who missed the Marlborough fixture to play for Gloucestershire CCC against Australia ‘A’, also played for the England U19s in an ODI ‘Tri-series’ against their Indian and Bangladeshi counterparts and ultimately ended the summer scoring an unbeaten 77 to help ensure Gloucestershire’s promotion to Division One of the County Championship. Fourth Former Alex Horton, who was the top run scorer for the 1st XI this season, became the youngest person to ever play for Glamorgan 2nd XI in June, top scoring with 58 against Gloucestershire 2nd XI, whilstLuke Charlesworth broke in to the Gloucestershire 2nd XI in August.