Even though we are not able to be in school, one Teddies pupil is being highly productive at home – by using a 3D printer to make protective visors for the NHS.

Segar’s Fifth Former Angus Graham and his brother Charlie bought the printer from ebay some time ago, and have been using their time at home to get to grips with how it works. They started off making simple items, such as a desk tidy, and with growing confidence and expertise, they are now putting the printer to more purposeful use and have already made over 25 of the masks.

A 3D printer works by squeezing molten plastic out through a tiny nozzle that it moves around precisely under computer control. It prints one layer, waits for it to dry, and then prints the next layer on top. It is possible to create almost anything this way. Angus and Charlie have spent a lot of their time working out ways of speeding up production with different nozzle sizes and programming, and sourcing the clear plastic to go on the front which they can’t print themselves. The boys have been communicating with others online who are galvanising others with 3D printers to do the same thing –  sharing patterns, ideas and tips. If anyone else has a 3D printer and wants to get involved, Angus can offer advice!
The Graham family have now been able to get the visors to a consultant virologist working at Charing Cross Hospital and Liz Williamson – a speech and language therapist who is shortly going to be working at the Nightingale Hospital, and got in touch after seeing a Teddies Instagram post about the boys production line.
Angus’s mum Sophie says: ‘It’s great that they’ve got a real sense of purpose now and hopefully will be helping to save some lives.’ 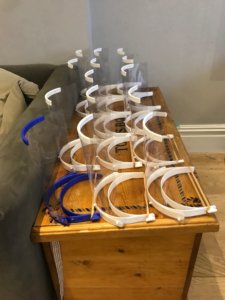 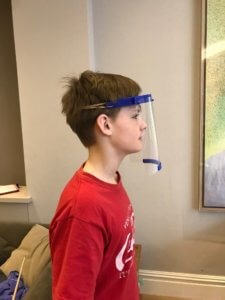 Angus in one of his visors