Cradle of the Renaissance

Our Upper Sixth Art Historians made their way to Florence on Thursday to explore the art and architecture of this enchanting city. Cosmo Habib, who was on the trip, tells us of their exceedingly cultural weekend:

Having arrived in Pisa, taken the train to Florence, and arrived at the Hotel Albion, we were 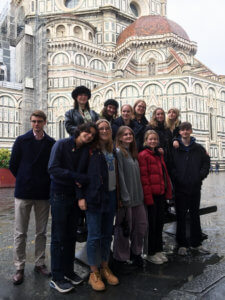 absolutely knackered and so grateful a lovely supper prepared by our generous hosts and comfortable beds to climb into. Well rested and fed we woke up the next day ready to face Florence. We made our way straight to the Santa Maria del Fiore and its grand Duomo and were awestruck! Even though I had seen it before I was absolutely stunned by how beautiful and grand it is. We then proceeded to climb the dome which I must admit caused some of us including myself a case of claustrophobia and vertigo, however once we got to the top we realised that it was more than worth it – the views were stunning!

After an hour of exploring Florence’s markets we met back at the cathedral’s Baptistry were treated to yet another gorgeous interior. We didn’t stay long though as it was off to the Uffizi where we were finally able to see the magnificent artwork that we’d learned so much about. Not quite finished for the day we got a quick lunch and headed on to the Palazzo Medici Riccardi, where we viewed the gorgeous Chapel of the Magi, with beautiful ceiling art done long after the Medicis lived there. Having walked around for such a long time we managed to make it back to the hotel for a rest and then a lovely supper.

The next day we were on our way again, this time to see the artwork of Fra Angelico at San Marco and then the Accademia to see Michelangelo’s famous ‘David’. We were once again awestruck by the magnificence of the famous city and the products of its Renaissance. We continued on to the church of Santa Maria Novella with its beautiful façade and Masaccio’s incredible Holy Trinity. We then went and had lunch which was much needed after all the walking before taking in the Ponte Vecchio, a medieval arched bridge over the Arno dazzling with jewellery stores. On the last day we sped to the Bargello to the see another ‘David’, Donatello’s this time, and then onto an incredible immersive exhibition by one of Miss Schofield’s old friends who had revived the style of the Renaissance to sculpt a series of 10 impressive sculptures of Mary and baby Jesus. 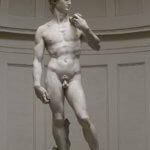 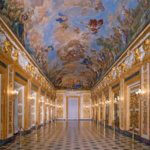