On the 8th July, a couple of days after Gaudy, a group of 12 Teddies students and 3 teachers found themselves in the middle of the bustling footsteps of Heathrow Airport, shouldering 65-litre rucksacks with highly fashionable walking boots. We stood together as relative strangers about to embark on an adventure which would soon unite us. 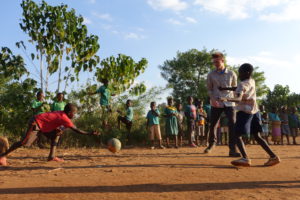 The journey was made long and tiring from the extensive waiting times between flights, but morale was kept high by the excitement of reaching Malawi and the large variety of films shown by Ethiopian Airlines. As we watched, the spaghetti-winding motorways of London carrying a stream of orange lights were replaced by the veins of dusty orange tracks branching off from the main tarmac road of Malawi. As we got off the plane, our faces were hit by the familiar heat of holiday.

A bright yellow bus welcomed us at the Blantyre Airport and took us to Kabula Lodge, a simple but neat accommodation not far from the village we’d be heading for the following day. The meals were delicious and buffet-style from which we readily helped ourselves to pancakes, chicken and chips. However, perhaps what was most shocking – yet equally oddly charming – was driving past the morning market: men, women, children sitting poised photogenically outside their stalls made with tall, whittled sticks; some walking to school; others carrying enormous loads on their bicycles; all curiously staring after us waving. The smell of burning coal and plastic filled our noses as we gawked at the mountains which circled majestically around us, the sun painting them gold. 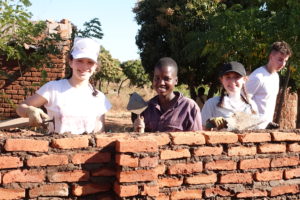 Finally, we turned off onto a bumpy dirt track which wound its way round hand-tilled fields & a couple of brick houses with their corrugated-iron roofs held on by stone piles. Scrawny- looking trees lined the road as our driver expertly avoided most pot holes. Then we heard the children. A few at first who leapt up waving leafy branches after the bus, but then more and more joined in with the song “Hey! Ho! The visitors have arrived!”. Their eager faces beaming as they ran, some barefoot, others in crocs or flip-flops, one with her cup strapped on to her uniform. You could almost touch them. It was a moving experience which I think drove our efforts on the project. 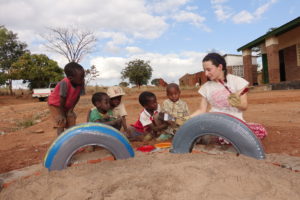 At around 1 o’clock the opening ceremony was about to begin. We each grabbed a chair and carried it over to a large empty space behind a classroom, but we were hilariously put to shame when some children – perhaps half our size – took over and carried 3 chairs with ease. Forming a square with the teachers lining the bottom, and the children on either side, 3 women opened the ceremony with drums and dancing, urging us to join in – which despite the heat and our unfamiliarity with the dance moves (making them roar with laughter), it was remembered as a highlight of the trip. The gracious speeches made by a representative of each group, showed the warm welcoming nature of the villagers which was made even more vivid by sharing with us some traditional entertainment – dancers dressed head to foot in feathers to the beat of a maraca or having to take off an infinite number of layers after a display of vigorous and impressive footwork. As the ceremony came to a close, it was now our turn to share some dances, activities and songs with the community. All desperate to be included in the handshakes, ‘Hokey-Cokey’ and ‘Duck-Duck-Goose’ the rest of the evening flew by. It was relatively late when we retreated to our beautifully, handmade compound of bamboo to set up our dorms and mosquito nets in some classrooms generously offered by the school. 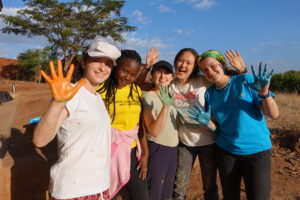 As we brushed our teeth under the clear sky, wrapped up in a few more layers, we gazed at the stars. The moon was so bright we hardly needed a torch to go to the loo, the long drop loo, which required a certain getting used to but were, in the end, largely accepted amongst the group.

We woke up refreshed and ready for our first porridge ladle of many to the sound of children’s school morning chants. After being split into two groups we headed off on the scenic path towards the project site.

We made fast progress on the first day, getting used to digging many holes with a crow-bar-like pole for the playground & learning how to mix cement & build upon the loo block foundations. With delicious snacks ranging from ‘mandazies’ (surprisingly irresistible Malawian snacks made from rice mix and oil) to papaya & pip-full yet tangy oranges, the project grew around us – the wooden poles became climbing frames, windows were put in on the loos, clothes & skin got spattered with paint & we soon mastered the flick of the wrist – a sophisticated art for plastering. The builders of course were a central part in this process to ensure the project would remain long lasting and secure. 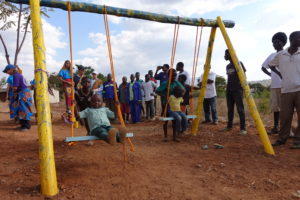 Our evenings were a much-needed rest as we scrambled for our sun-heated bucket showers. Whilst some were spent with the children, we also squeezed in some group games before supper, such as the adrenaline-fuelled ‘satsuma game’ & a few hilarious rounds of ‘Empires’ or poker to keep morale high after long sweaty days. However the game ‘Assassin’ which continued throughout the final 4 days, kind of like a real life Cluedo, was hugely entertaining.

On some days we also got to help out at the nursery’s feeding centre for 80 hungry young mouths and experimented with the roles of teachers as we attempted to teach them the names of colours, with limited success but a lot of fun. Spending time in the kitchen learning how to cook the traditional meal of rice, beans and cabbage with our wonderful head cook, Fanny, was great and also gave rise to some interesting conversation about women’s role in society or teaching us some words in Chichewa. 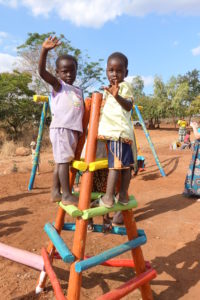 Another highlight of the trip was our ‘rest day’. We were warmly welcomed in the Sunday church service where we were invited to sing our chosen song, Jerusalem – conducted energetically by Kitty. We then spent all our money at a market which arrived literally at our doorstep despite thinking we had done some successful haggling…

On Friday, we bought chickens for 3000 Kwacha each (around £3) to eat, for which Max enthusiastically took part in their butchery and where the expression, ‘running around like a headless chicken’ became all too real. 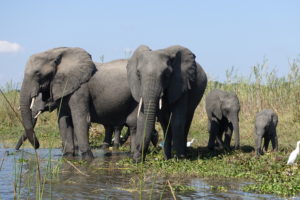 The safari on the last two days was a complete treat and the highlight was the dazzlingly beautiful sunset on the river listening to the brays of the hippos. Back at our campsite the faint smell of animals and heat wafted around – hardly surprising seeing as we shared it with the elephants who came trampling at 2am. Despite the disturbance we slept well and finally managed to get up close to the elephants on our boat safari as they drank & bathed in the river. Crocodiles lay like statues further on and pods of hippos lazed in the sun.

Overall, it was an even more rewarding experience than I could ever have imagined. We had signed up to build some crucial structures for the children of Masu village and the Joshua schools and we left with a whole new sense of the world. Being around such a friendly and welcoming community, all pushing for development and equality in girls’ education (slogans were written on the walls) I was not only hugely admiring of their hard work and friendliness, despite such poverty but also it gave me a strong sense of desire to return & work with them again. However, we could not have done it without the teachers Mr Coram-Wright, Miss Bellamy or Lisa, nor our wonderfully inspirational leaders Ali and Carlyn, and the Joshua leaders Stevie and Hilda who were so helpful in translating conversations. I would recommend it to anyone thinking of doing it, Malawi really was a memorable experience.

St. Edward's have been competing at the National Schools Regatta since it began in...
14 May 2020 General, School Life, The Arts

We really missed the Oakthorpe House Charity Ball and Auction that, very sadly,  had...
12 May 2020 General, OSE, School Life