Teddies and the War to End all Wars, 100 Years on

The 100th anniversary of the Armistice, marking the end of the Great War, passed last Sunday, and members of the St Edward’s community have reflected on the particular poignancy of this centenary for the School.

St Edward’s has a long and widely-known link with the military, harking back to the Boer War (85 OSE served), and the sense of this is still very much present in the life of the School today: in the form of the CCF, the Calvary in the Memorial Quad (dedicated in 1919), the names of the fallen lining the walls of the Chapel, whose names and school honours have been read out by the Warden at assemblies and at Gaudy since the summer of 2014, marking the centenary of each of their deaths.

The School Archivist, Chris Nathan OSE, has produced an article looking at a less commonly recognised area of the School’s contribution to the Great War: the seven members of the teaching staff and at least four other staff who enlisted to fight (you can read Chris’ account in full here). Pictured above is the Common Room of 1913, including three of the four teachers who would enlist and die in the fighting. In total, 673 former pupils and staff joined the Armed Forces and served during the First World War, with 121 OSE losing their lives either in service or subsequently of their wounds. 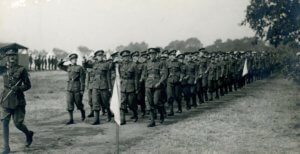 The ‘War to End All Wars’ alas proved anything but, and the history of the School’s service in the Second World War, particularly to the Royal Air Force with the likes of Douglas Bader and Guy Gibson to name but two, is well documented. In total 1, 700 OSE, teachers and other staff joined the military or, in the case of 79 OSE survivors of the First World War, rejoined. A further 156 members of the School were lost to conflict. The photo to the left is of the Officers’ Training Corp, formed of 190 pupils, at their Summer Camp in 1938 marching past Major ‘Gerry’ Segar. Many of those in the photograph would be at war 12 months later.

The School’s CCF contingent paraded at the Wolvercote and Wytham Remembrance Service, as they have done for some 60 years. One of St Edward’s current NCOs, Cpl Sebastian Williams, reflected in advance of the Parade on the particular significance of the role played by the Contingent in the Commemorations this Centenary year in particular.

‘I still remember the first time I went to Wolvercote for the Remembrance Service very clearly. I was in the Fourth Form at the time and it made my heart race to be surrounded by so many of our Cadets in all year groups, marching in unison. The faces of the spectators bore proud smiles as the CCF Contingent proceeded as one through the winding streets of Wolvercote. The feeling of being in uniform and the symphony of the boots clashing against the ground is an invigorating sensation.

‘Being part of a tradition that has been going for upwards of 60 years is also one of the best experiences that one could have: there is a sense of being like a piece in a complicated puzzle that would not be the same without everyone working together as a team to bring it together. I was given the choice to partake in the Commemorations again this Centenary year and I am pleased that I will, because of how wonderful it was representing the School and honouring those who had fallen in the wars, both in our school community and more widely.’

There was also a full and moving service of commemoration at the School, with wreaths laid in Chapel by the Heads of School, Annabel MacDonald-Smith and Toby MacLachlan, poppies laid at the Calvary and crosses planted in the Memorial Quad for those members of the school community who fell in armed conflict.