The Cricket Club are enjoying another successful season, with sides across all age groups finding form. Particular congratulations are due this week to the 1st XI who have recovered the John Harvey Cup after missing out last year after two of their matches had to be abandoned. This year’s victory was tied up at home to Radley College on Saturday. Radley posted a total of 226-5 in their 50 overs, which St Edward’s chased down with five overs to spare.

The path to reclaiming the Cup saw victories over Bradfield by 6 wickets, Winchester by 155 runs, Marlborough by 404 runs, before a surprise loss to Cheltenham left the XI with a must win fixture over second placed Radley. Congratulations to the team for a largely consistent and often dominant display.

Beyond Upper 1 two of the School’s foremost cricketers will be taking on new challenges this summer. 1st XI captain, Harrison Ward, and opening batsman, Ben Charlesworth, already have enviable returns with bat and ball this season, and it hasn’t gone unnoticed elsewhere. 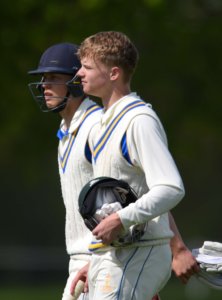 Harrison, who is part of the Sussex CCC Academy, and plays for Oxfordshire CCC has been called up to the England U19 squad for a two test series against South Africa U19s this summer. The tests, which will be played at Scarborough from 8th to 11th July and at the Emirate Riverside from 16th to 19th July, offer another step up for Harrison, who played in an Invitational XI against India last summer scoring 69.

Before the England U19s get underway, the South Africans will play a warm up match against an England Invitational XI, including Ben Charlesworth. Ben, who became the school’s second player to score a double century this season in the win over Marlborough, will be playing at Loughborough on 3rd and 4th July.

The very best of luck to them both.

Meanwhile, Cricket Week gets underway on Tuesday with the 1st XI playing Free Foresters, a School XI will play the RAF in Uxbridge on Wednesday, before the 1st XI and a Development XI will take on Oxfordshire U17s and U14s respectively on Thursday, the MCC are the opposition for the 1st XI on Friday and the Martyrs play a School XI after Gaudy on Saturday.

The Medical Centre is an integral part of the School, and particularly now, has...
22 May 2020 General, Sport

St. Edward's have been competing at the National Schools Regatta since it began in...