An account of the talk given by renowned documentary maker and traveler Reza Pakravan, written by Anton Frieser, Lower Sixth

I recently attended a talk given by world record holder, filmmaker, and traveler/extreme athlete Reza Pakravan, who has made documentaries for BBC World, Channel 4, Fox and many more. Mr Pakravan, who has undertaken many journeys and challenges, discussed his many feats. He focused in this talk on setting his world record time for cycling across the Sahara, as well as cycling from Norway to South Africa (detailed in his book and TV series: Kapp to Cape). Both of these are highly impressive accomplishments, which Mr Pakravan described in great detail and to great effect. 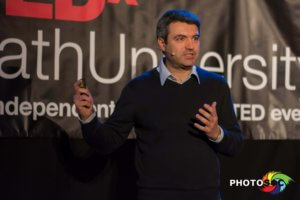 Mr Pakravan told us about how he came from Iran to study in the UK and subsequently also got a job here working in the City. He recounted how at first his job in the finance sector had been exciting and fun, but how, as the years went on, it got less and less so until his enjoyment of the job had all but disappeared.

He then went on to describe how he attempted, and succeeded, in escaping what he felt was the mundane existence of living and working in the City. He examined his strengths and concluded he particularly enjoyed and had a talent for long distance cycling. The world record holder to-be then decided to take the risk of leaving his job, and cycling across the Sahara. He completed this immense feat with the help of a Touareg guide. Mr Pakravan then further recounted past adventures and outlined future projects that he will undertake, such as his tour of the Amazon, where he will meet indigenous peoples, and outlined the dangerous effects of climate change on this environment.

Overall I found the talk to be very interesting, but what fascinated me the most was how someone can challenge themselves to go from living and working in the City to becoming an extreme athlete, filmmaker, traveler and adventurer.