Nick Elliot in the Upper Sixth provides a review of last week’s lecture given by Professor Brad Hooker.

This term the Philosophy Society were lucky enough to have a visit from Professor Brad Hooker (the University of Reading). Hooker initially began his studies of Philosophy at Princeton University before moving on to Oxford University to complete his BPhil and DPhil degrees. During his time at Oxford he was tutored by some of the biggest names in moral philosophy, including Derek Parfit and Richard Hare. Hooker himself has dedicated much of his academic life to defending an ethical theory called rule-consequentialism. One of his most famous works is the book Ideal Code, Real World where he presents his defence of rule-consequentialism in its entirety. Rule-consequentialism holds that people should make their moral decisions by using the rules whose widespread acceptance would maximise the expected good. These same rules are what make acts required, optional or wrong. Hooker argues that the benefit of this theory is that it not only allows people to prioritise themselves in some moral dilemmas but also allows for us to take special responsibility for friends and family, something that other consequentialist theories don’t permit. This theory, therefore, is much more in line with our human intuition, which makes it a far more practical approach to moral decision making. 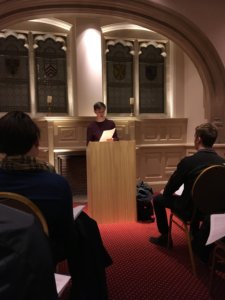 After Professor Hooker had presented his case for rule-consequentialism, the Philosophy Society’s very own Jack Riddick presented an essay which he wrote about the practical issues to do with rule-consequentialism in a 21st century world. Jack picked up on how we may struggle to accept the prerogative that all life is equal whilst also maintaining the relationships that Hooker values so highly. Jack continued to talk about our inability to internalise rule-consequentialism as many of the rules seem contradictory to our own fundamental human beliefs. Before responding, Professor Hooker praised Jack’s essay and commented that it would score a fist class mark if submitted as an undergraduate essay. He was particularly impressed with the essay’s ambition. He then went on to say that although Jack had presented some insightful issues with rule-consequentialism, there comes a point where we must all ‘bite the bullet’, as a world with some sort of universal moral theory is better than a world with none. What had been a very fulfilling and insightful evening was rounded off with a question and answer session followed by supper in the Master’s Common Room.