The Caucasian Chalk Circle: a review

In November we had the pleasure of watching our first school play at The North Wall – The Caucasian Chalk Circle directed by David Aldred, with musical direction by Alex Tester. This ambitious production of Brecht’s epic play was skillfully handled, with a cast of 26, puppetry, movement, and live music throughout. 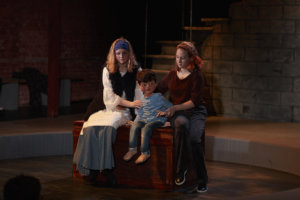 A morality masterpiece, The Caucasian Chalk Circle powerfully demonstrates Brecht’s pioneering theatrical techniques. A servant girl sacrifices everything to protect a child abandoned in the heat of civil war. Order restored, she is made to confront the boy’s biological mother in a legal contest over who deserves to keep him. The play is as relevant a political commentary today as it has ever been, forcing us to interrogate difficult but valuable questions around ownership, social justice, and the conduct of war.

In this production the traditional prologue is cleverly replaced with something far more immediate – a contentious (and wonderfully performed) ‘speech’ from the Warden telling us of the School’s intention to close The North Wall, due to lack of space, with a plan to return the building to its former glory as a swimming pool. Heckling ensued from the Heads of Music and Drama and the audience found itself in the midst of an energised debate about who and what The North Wall is for and who is best placed to make use of its resources. 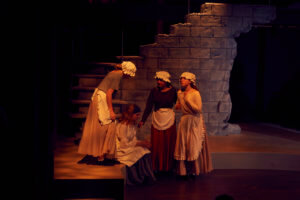 This bold choice remains true to the original text whilst bringing the central themes of the play bang up to date and incredibly close to home. The Singer, a compelling and convincing Sassy Hammersley, interrupts the debate and smoothly introduces us to the story within the story – the tale that will help us reflect more fully on the ethics of ownership.

As the music kicks in and the story unfolds, with Grusha weaving her perilous way through a vicious conflict, one is struck by how powerfully the play speaks to the current plights of civilian populations caught up in conflicts around the world. That is thanks, in no small measure, to the talents of Selena Thompson, whose affecting portrayal of Grusha goes directly to the essential courage and selflessness of her character. The heroine becomes, as Brecht no doubt intended, a kind of Everywoman, a universal evocation of the innocent ‘little person’ whose life is turned upside-down by war. 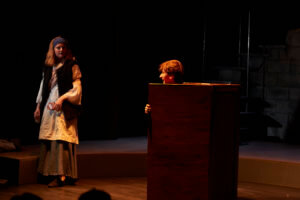 After the interval we are introduced to Azdak, brilliantly realised by Bash Croft with a witty and inventive characterisation of the unconventional judge. His Azdak bestrides the stage with a confidence and mischief that is great to watch – it is a commanding performance.

However, this is not a production of individuals and the entire ensemble should be commended as they workED tirelessly and skillfully to create the world of the piece, demonstrating fantastic levels of versatility and commitment throughout. Special mention needs to be made of The First Reserves who provide a stunning soundtrack and masterfully integrate live music with the text. The familiar phrases of music and lyrics that echo and return over the course of the play are a tremendous additional layer that keep the action in tune, on track and on point. 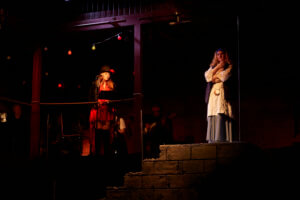 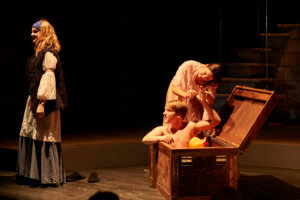 The stories are brought to their conclusion and are beautifully bookended as we witness the ensemble coming together in full voice to sing “The North Wall to the artists, the playhouse to the players!” It is a joyful reminder of what an important building The North Wall is and how, as Co-Directors, we have the good fortune to influence its future.

Ria Parry and John Hoggarth
Co-Directors of The North Wall

More photos from The Caucasian Chalk Circle are available here.