‘How to’ guides: Lower Sixth Academic Forum in the Summer Term

This term’s Academic Forum took the form of ‘How to’ guides for an interesting range of situations.

In May, pupils learned How to negotiate. Disgruntled Lower Sixth pupils, irked at not being chosen as Prefects, holed themselves up in the 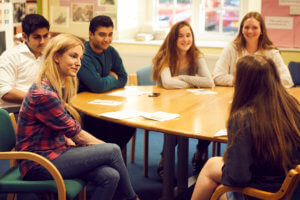 JCR with a series of demands. The ‘negotiators’ were the new Prefect body, charged with persuading them to back down peacefully and with as little fuss as possible. Unbeknown to those piqued would-be Prefects, though, the negotiators were armed with some FBI tactics for successful negotiation: active listening, mirroring, emotional labelling, effective pauses – all ways to create a feeling of empathy. On balance, the negotiators achieved more of their aims, but with a good deal of compromise – although the peeved pupils did score a public apology from the Warden!

Later the same month, we took a different bent and explored How to be funny. By studying a series of jokes, and hearing the thoughts of a number of famous comedians, we broke down humour into its essential components. There are many facets to what makes something funny, but most prominent are surprise, speed, incongruity and, above all, subversion of expectations. A healthy mix of pupils and teachers teamed up to write their own jokes based on these principles. 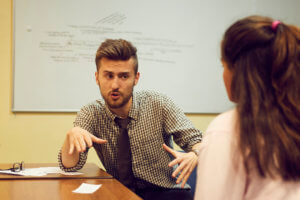 Last week, pupils learned perhaps the most important everyday life skill: How to have a difficult conversation. The essential skills, they learned, are to listen actively to what the other person is saying, to avoid making the conversation about themselves, and to try not to offer quick fixes that trivialise the other person’s feelings. They tried out these tactics on two excellent role-play actors in situations that could be very real to them, now and in the future: appeasing an angry customer in a restaurant; talking a friend out of drink-driving; as leader of a group project, resolving conflict with a member of a group who feels undervalued; and persuading a passenger to leave an overbooked flight…

Through these three short sessions, those pupils who have taken advantage of the opportunities are a little better equipped to deal with life.