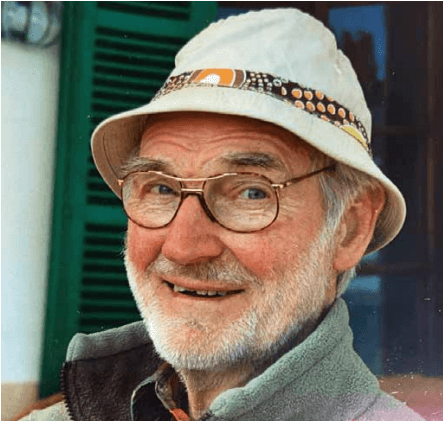 Dick Burtles was for many years a popular and respected anaesthetist at the Royal Hospital for Sick Children Edinburgh. His father was a promising research chemist who died of a ruptured spleen after falling from his bicycle three days before Dick was born. Dick’s mother, Vera, was only 21.

Some years later she wed Harold Hawkins, a serving officer in the army. The couple had two children – Anne in 1929 and Sue in 1942. With his stepfather stationed overseas, Dick lived with his mother in Bognor Regis, but when his grandmother fell ill Vera had to care for her, and Dick enthusiastically started boarding aged seven. He captained the first 15 rugby team in 1939 before moving to St Edward’s School in Oxford.

In 1943, he gained entry to study Medicine at Middlesex Hospital Medical School. Dick was exempt from military service so instead joined the University of London Senior Training Corps. He graduated in 1949 and started a house job in surgery at the King Edward Memorial Hospital in Ealing. His conscience bothered him, however, and he obtained a short service commission in the Royal Navy in 1950, training in Portsmouth, and at the Commando School at Bickley, with further specialist training at the Army School of Tropical Medicine. On completion of his training he served for two years with 40 Commando Royal Marines in Malaya.

As a young doctor, his duties ranged from treating everyday tropical illness to battlefield injuries. It was in Malaya that Dick first developed his appreciation of practical technology solutions that were to inspire many of his later inventions for use in the anaesthetic room, and his long-standing support for the charity Practical Action.

After Malaya, Dick continued his National Service with Royal Marine Commando in Malta before returning to the UK at the Royal Naval Isolation Hospital at Chatham, where he commenced his training in anaesthesia. He continued his service in the Royal Naval Reserve for many years. Dick completed his anaesthetic training at the Middlesex Hospital before moving to the Fulham Fever Hospital, which specialised in “infantile paralysis” (polio) utilising “iron lung” equipment.

In 1957, Dick moved to Southampton General Hospital to take up a post as Senior Registrar and worked on some of the latest treatments in cardiac surgery. In 1958, Dick happened to see an advertisement for adventurous people to drive to Spain for a fortnight’s holiday. It was on this trip that he met his future wife, Sheila Sutherland. It must have been love at first sight as he proposed while in Spain and they married on Valentine’s Day 1959.

In 1960, Dick and Sheila moved to Northampton, where he took a consultant position, and it was here that Dick developed his specialist interest in children’s anaesthesia. First daughter Sally was born in 1961, with Emma following in 1969. After a few years in Northampton, Dick applied for the position of consultant anaesthetist in Edinburgh – sharing his time between the Royal Hospital for Sick Children and Princess Margaret Rose Orthopaedic Hospital. He specialised in anaesthetics for plastic surgery, spina bifida, and cerebral palsy.

In 1965, Edinburgh University, supported by the World Health Organisation, proposed setting up a new medical school in India. Dick was appointed a visiting professor and the family moved for the year to live in Baroda (Vadodara); then Dick was invited by the WHO to advise on a new facility in Kabul, Afghanistan, before returning to the Sick Children’s Hospital in Edinburgh. For the next 20 years, Dick continued providing expert anaesthetic care for children (and made an annual appearance as Santa Claus). He specialised in paediatric cardiac surgery, utilising heart/lung machines in intensive care.

Around 1980, Dick founded the Friends of the Sick Children’s Hospital, starting with a fete in the car park, to raise funds for a new scanner. Many events followed, next funding the first computer for the hospital, costing £9,000, The organisation has gone from strength to strength, growing into the body it is today. He continued to visit hospitals in other countries to help develop their paediatric care, and through the Naval Reserve. In 1984, Dick was invited to join a specialist paediatric cardiac surgery unit in Riyadh, Saudi Arabia, developing techniques for newborns, allowing adequate time for complex surgery while minimising distress to the child. Initially contracted for one year, he remained for six.

In 1990, only months from retirement, Dick was in Riyadh during Saddam Hussein’s invasion of Kuwait and witnessed aerial bombardment of the city by scud missiles. The subsequent burning of the Kuwaiti oil fields caused widespread pollution in the region and irreparable damage to the health of thousands, including Dick, who contracted avian tuberculosis. He was eventually able to leave Saudi Arabia in 1991.

Dick returned to work at the Sick Children’s and Western General Hospitals until he was 70. He supported many charities as treasurer, including Edinburgh City Art Centre, Scottish Somali Action, Almond Valley Heritage Trust and the Royal Scottish Society of the Arts. He was also a volunteer guide at the Royal Museum of Scotland and active in Edinburgh Liberal Democrats. Dick was an immensely popular gentleman, his caring nature well suited to his chosen profession, in which he was well respected wherever he worked. With a gentle humour and sharp wit, he loved a party or family gathering and celebrated his 95th birthday in July.

Dick died peacefully at home and is survived by his wife Sheila, sister Sue, daughters Sally and Emma and grandchildren, Hamish, Dougal, Alfie and Rory.