Stephen Jones to retire in July 2021

It was announced today by Chris Jones, Chair of Governors at St Edward’s School, that Warden Stephen Jones will retire in July 2021. 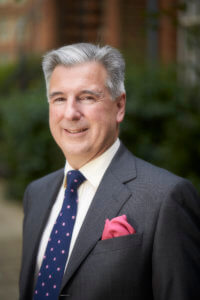 Making the announcement, Chris Jones said, ‘Stephen told us of his plans to retire in December. We will have time to reflect at length on his many achievements at Teddies next year, but, for now, the entire Governing body and I wish to thank him and Katie wholeheartedly for their unstinting energy and commitment to the School. Since taking over as 13th Warden in September 2011, Stephen has overseen a period of remarkable growth and development at the School. The academic culture, in particular, has seen a step-change in outlook from traditional ‘chalk and talk’ classroom practice to a modern culture of active, collaborative learning. Results have risen sharply since Stephen took over and the academic programme at St Edward’s, with its enlightened, innovative choices, is now at the forefront of modern educational thinking.

Elsewhere, to keep pace with the growth of the School, Stephen has worked with Governors to invest in academic, community and boarding facilities of the highest quality. A fifth girls’ House, Jubilee, opened in 2013; the elegant and high-specification Ogston Music School opened in 2017; and the School’s first co-ed Boarding House, Cooper Lodge, will open later this year. In the Quad, two substantial developments are nearing completion: a striking, university-level academic centre purpose-built to further fuel the School’s academic ambition; and a stunning 1,000-seater Hall to enable the growing community to come together for assembly, performances, worship and countless other occasions.

The wider community of Oxford has been an important focus too. Always keen that the school community should be outward-looking and in touch with real life, Stephen has encouraged the expansion of the Beyond Teddies programme, the School’s far-reaching network of volunteering and community support activities.’

Reflecting on his forthcoming retirement, Stephen said, ‘July 2021 is still a long way off and, as we embark on one of the most extraordinary terms ever experienced at St Edward’s, my focus remains firmly on my colleagues, our parents and, above all, the pupils, who are the beating heart of this great school – it will be very strange not having them around this term. My rooms overlook the Quad, and it has brought me huge joy over the years to watch the busy patterns of school life being carried out with such cheerfulness and enthusiasm on a daily basis.

Like many organisations, we face challenges in the coming weeks and months, but I know we shall all raise our game, and I look forward to completing this academic year in the indefatigable spirit so characteristic of Teddies.’

It is expected that an announcement about Stephen’s successor will be made in the summer.